JUNE 2008.
Crofton Lions Club Changeover Night when Lion Lisa Pitt, with only one years service, took over as Lion President. The outgoing President Lion Charlie Read presented cheques for £500.00 each to the Local Branches of MIND and MENCAP. ‘Lion of the Year' badges were presented jointly to Lions Harry Hayman and Lisa Pitt, a Special achievement Award was presented to Lion Reg Norton for the creation of the "Festival of St. George", and in what we believe was a "first" for our District, he presented a Medal of Merit to Cllr. Mrs Katrina Trott for her outstanding dedication in working for the community during her period of office as Mayor of the Borough of Fareham. 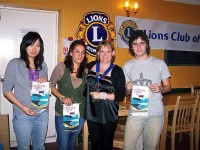 *  Citizenship Project with the children of Crofton Anne  Dale Infants School.
* A Melvin Jones Fellowship was presented to Reg Norton on behalf of District 105D by D.G. Pat Nixon at the District Changeover Lunch in Southampton.

AUGUST 2008.
· Hosting Alexandra Bolanos Acea from Mexico and Mayumi from Japan, who were participants from the Lions International Youth Centre at Avon Tyrell in the New Forest.
· Stubbington Fayre & Donkey Derby. We helped with all of the organisation, the parade and Fayre Sideshows in addition to running our own stalls.

SEPTEMBER 2008.
· Crofton Lions Senior Citizens Party where we hosted over 70 Old Folks for an afternoon of entertainment followed by High Tea. The entertainment was provided by "Nostalgia" and "The Stomping Mad Jazz Band"  All of our guests went home at the end of the day with "Goody Bags" containing Tea, Biscuits, Fruit, Cream and a variety of gifts and information packs.
OCTOBER 2008.
· Crofton Lions enrolled THREE new members at a special Club Dinner on 30th October.  Welcome Lions Jane Tucker, Donna Sullivan and Carol Channing!
· Titchfield Carnival gave us an opportunity to "dry run" our Christmas Sleigh ready for the Lord Mayors Show in 2 weeks time in the City of London. We got a great reception and collected approximately £200.00 en route to help Carnival funds for 2009.
· The District Service at Warminster where we were represented by the President and five other members.

Concern for the environment, promoting a healthy lifestyle, and the safety and wellbeing of pupils were all considerations when Crofton Lions Club decided to help with a new Road Safety Project for Crofton Hammond Infants School. On 19th November we presented every child in the school with a Hi Vis Jacket.

by an estimated 15million viewers on

television when we took part in the world

renowned ‘Lord Mayors Show' in the City of London.

We took part in two Remembrance Ceremonies in Crofton and Fareham.

Our Annual BIG Quiz broke all previous records as a fundraiser by making a profit of £790.00 when we entertained over 100 guests with the "All singing, all dancing" Quiz plus a meal on Friday 14th.

DECEMBER 2008.
· Lion President Lisa asked the Crofton Lions to create their own Christmas Gift List (with a Twist!) The 14 Lions each chose a ‘Good Cause' to which the Club donated £100.00The good causes that benefited were Stubbington Girl Guides, Fareport Talking News, Elizabeth Foundation for Deaf Children,The Stubbington RSPCA Ark, Macmillan Cancer Care, Seahawks Group for children with Diabetes, Christmas Day Dinners for lonely people, Jacks Place @ Naomi House, Gurkha Welfare Trust, Help for Heroes, KIDS, Old Street Care Home, SNAP Discos and Equipment for a talented young sports girl.
· Crofton Lions with the Mayor of Fareham,Children from all local junior schools plus Santa and his Christmas Sleigh all joined forces to "Light Up" Stubbington Village and organise a Carol Concert serving Mulled Wine and Mince Pies.
· Our eMail address for Santa Claus responded to 30 childrens letters, all hand delivered in special envelopes with a "North Pole" postmark.
· The Club with Santa attended two School special events and a party for adults with severe learning difficulties.
· Two Christmas Parties!  One with our Mother Club, Fareham, and our own special dinner at The Queens Head in Titchfield

JANUARY 2009
· We invited two more prospects to join Crofton Lions Club and they have confirmed their interest. Mike Shipley will be inducted next month and Jane Dawson at a later date.
· Feedback from the fourteen ‘Good Causes' of our Christmas Gift List (with a Twist!) has been superb.
· Eleven Club Members celebrate the Chinese New Year with members of the Chinese community in Crofton.

FEBRUARY 2009.
· District Governors Official Visit at which Mike Shipley was inducted as a member of the Crofton Lions Club. Six Lions met for a meal with the Governor prior to the meeting.
· The whole club turned out for a Curry & Quiz Dinner Meeting at the "Red Lion" in Stubbington on the 26th.
· Visit to the 42nd Charter Anniversary Dinner of Cosham Lions Club.

MARCH 2009.
· President & Secretary attended District Convention at Norton Grange, Yarmouth on the Isle of Wight. Lion President Lisa is determined to get maximum attendance by our Club at next years 60th Anniversary Convention.Lion Reg Norton received the International Medal of Leadership from Immediate Past District Governor Pat Nixon at the Convention.
· Eight members took part in Lions Day with the United Nations at the Palace of Westminster and meeting with Al Brandel, International President of the Association of Lions Clubs. Another of the principal speakers was Martin Bell OBE.

Our 8th Charter Anniversary at Lee on the Solent Golf Club.We had nearly ninety Guests, and the event was a great success.

Lion President Lisa received Special 5 year Volunteers Award on behalf of the Crofton Lions for its contribution to volunteering in the Borough of Fareham. Also in the picture is Rebecca Read who was awarded a Young Volunteer Certificate, Lion President Doreen Norton of Fareham for 40 years and Lion President Barry Woolcott of Swanwick for 30 years volunteering service .
This month, wth support from Squarezone Computers,we established our own website  ..........and this is it!

The Crofton Lions "Festival of St. George" from 19th to 25th April involved the whole community. It started on Sunday 19th with a Parade of up to 600 scouts from the Fareham West Scout District., followed on Monday 20th by a Cavalcade of Motorbikes and Mini Cars all flying the flag!The Queens Birthday (21st) was announced by Town Criers and a Toast offered to Her Majesty.

On Thursday 23rd a St. George's Day Dinner of Roast Beef and Real Ale was offered at each of the four local Pubs. We staged a Variety Show featuring the music of yesteryear on Friday 24th in the Crofton Community Centre, and the week finished with a Medieval Village Fayre on Saturday 25th It was opened by the Mayor of Fareham, Cllr Ernest Crouch, and The "Spirit of St. George" on horseback carrying the Standard of England The Fayre included a group of  "Living History" Jutish Warriors from 642 AD and Artisans from the time of the English Civil War in 1642, Belles & Arrows Morris Dancers, Nasira Turkish Dancers, Jonathan the Jester, Folk, Jazz and Brass Bands, St. Vincent Singers, Storytellers, Punch & Judy, and much more!.
There were Window Displays in many of the Shops to reflect the theme, and Stubbington Green was decorated with over 30 flags of St. George. 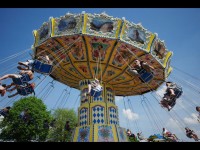 MAY 2009.
Paultons Park District Outing on 17th May.
We hosted a party of 30 from Connect Advocacy (An organisation helping adults with learning difficulties to live independent lives) and an additional group from the local branch of KIDS, the organisation that cares for children with disabilities. Judging by the wonderful feedback we received from almost every participant the day was a tremendous success.Our congratulations to Lion Lynda Wilson-Smith for the splendid organisation of the day, and for promoting it so effectively and boosting the numbers to more than 2000.

Presidents Changeover on Sunday 21st June which was a Garden Party hosted by incoming President Harry Hayman and his wife, Pat.

Retiring President Lisa Pitt was presented with a "Book of Memories", A presentation set of Tudor Fragrances and her Past presidents Medal.

She then presented Lion Mike Shipley with an award as her "Lion of the Year",

Other presentations were made to Lion President Doreen Norton (of Fareham L.C.) "Special Achievement Medal" for her help since the death of our Treasurer, Lion Robert Barham, Certificates of Appreciation to all Club Members and a 30 Year Award, together with a Silver Tankard to Lion Reg Norton