Work started on clearing the ground, cutting out the turf and removing 33 paving stones at the front of Baycroft School in Stubbington to prepare for the creation of a Sensory Garden.

To assist us Lion President Reg recruited four young sailors from HMS Nelson who had volunteered for community work.

We also had turf cutters and other equipment donated by EMF Plant Hire.

Our grateful thanks to them and the Navy!

The Navy Lark! Lunch provided by the School Headteacher was well received

*Now scroll down and take a look at NOVEMBER

to see how the Garden is progressing"

We supported the Broadlaw Community Space by taking part in their Wild West Summer Fair. We provided two sideshows, a Cowboy six gun game and a Football Target Game. We did'nt make much money but we had a great time and our new friends at Broadlaw were very appreciative.

Alison and Vicky 'aiming' to make some money for charity

Lions Nelson and Peter with our new Football Target Game

Cllr Trevor Cartwright and his wife, Ruth, Mayor and Mayoress of Fareham visiting our Sideshow.  In the pic: Mike, Vicky and Reg.

We think that Zella's expression says it all! This was a great day out. One of the best we've ever had!

A real highlight of his visit was the induction of THREE new members for our Club. Welcome to Lions Donna Chant, Alison Sales and Marc Eland

Unofficial Greeters Amy and Craig, the children of two of our Lions

A major attraction in the entertainment for our party were "Cascades", The South Downs Ladies Harmony Chorus. We have had a great deal of very favourable 'feedback'!

We were able to get a large quantity of Crocus and Daffodil bulbs from the Parks Department of Fareham Borough Council so, with Helen Deakins challenge in mind, we started to "Make the world a better place"!

Crofton Lions 'putting their backs into the task'!

Later in the week we invited children from the Crofton Anne Dale Infants School 'Nature Club'to join us in the Park to start planting doffodils around the childrens play area in the Stubbington Recreation Ground.
.......

But first the Lions had to do a great deal of digging to prepare the ground for the children to work on.

The Team from Crofton Anne Dale Infants School with some of the Lions and Parents.

On Thursday 13th October Cllr Trevor Cartwright MBE and his wife Ruth, the Mayor and Mayoress of Fareham, came to the Optical & Hearing Centre in Stubbington to take part in a Blind Walk.

First the Mayor was subjected to an Eye Health Test

before setting out on his "Blind" journey of discovery!

The Mayor sets out with Lion Charlie

Our Supporters also got involved.

Nikki taking the First Citizen on a tour of the Shops

From L to R: The Mayoress Ruth Cartwright, The Mayor of Fareham, Lion President Reg, Vice President Vicky and #1 Supporter,Nikki, and in the foreground...unofficial "Guide Dog" Queenie!

Eating Blind is not as easy as you might think!

At each location around the route followed by the Mayor was a sign explaining our project and a Lion to provide more information. Lion Nelson at his post outside the Opticians.

See our page "World Sight Day" in the Events section of this website.

The Baycroft School Sensory Garden is progressing well. Compare with the above Photos in July

Crofton Lions were represented at three seperate services...At the Fleet Air Arm Memorial, at the Stubbington War Memorial, and (pictured below) the President attended the Civic Event in Fareham at the invitation of the Mayor

Our Christmas activities were very successful in every way. We recruited some very attractive supporters, held a superb Carol Service in co-operation with the local traders, the schools, churches and other organisations. We were supported by the Salvation Army Band and the Hampshire Police Choir!

Then, to top it all, we collected more money than ever before!

Santa and friend at St.John the Baptist School

What a busy start we had to the New Year! And thanks to the people of the Crofton area for their magnificent generosity 2012 is going to be a very productive year!

AT THE START OF HIS YEAR OUR INTERNATIONAL PRESIDENT CHALLENGED LIONS CLUBS AROUND THE WORLD TO PLANT ONE MILLION TREES !

So,we started in January by planting 60 Trees (one for each year of the Queen's reign).

CROFTON LIONS WERE GIVEN 120 TREES BY THE WOODLAND TRUST.

(WE CHOSE GROUPS OF SIXTY TO COMMEMORATE EVERY YEAR OF THE QUEEN'S REIGN. IN ADDITION WE HAVE PLANTED MATURE ROWAN TREES IN SEVERAL PARTS OF THE LOCAL RECREATION GROUND)

Our special guests pictured here with Suzanne and Jane, two of the ladies es from the Broadlaw Community

the Mayor & Mayoress of Fareham

Into March, and we are once again into fundraising mode!

Our Giant chocolate Easter Eggs and Rabbits were everywhere!

St.Georges Day celebrations are the main feature of this month. Please visit our Events Section to see how successful we were this year

We have been able to provide our local surgery, the Stubbington Medical

Practice with an Ambulatory Blood Pressure Unit. Costing around £1300 it will enable nurses at the practice to double the number of patients they are able to work with checking potential heart and blood pressure related conditions.

The service, organised by 'Churches Together', was held on the Village Green in Stubbington on Sunday 3rd June 2012 preceeding.... 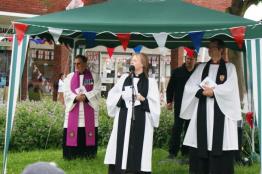 for full details and many more photos

Service of Thanksgiving at Winchester Cathedral

This very special event was arranged by the Lord Lieutenant of Hampshire, Dame Mary Fagan DCVO JP to which were invited any residents of the county who had served as volunteers throughout the Queen's reign. Our Club President for 2011-2012, Lion Reg Norton, has been a volunteer in five organisations for 62 years. Reg and Doreen Norton were invited to attend and were introduced to Prince Edward, HRH The Earl of Wessex.

Inspiring Music was provided during the afternoon from the Choir of Winchester Cathedral, The Hampshire Youth Band and the Band and Bugles of 'The Rifles'