ON HIS RETURN FROM EIRE, WHERE HE PAID A VISIT TO THE DUNGARVAN LIONS CLUB IN COUNTY WATERFORD, IT WAS TIME FOR REG NORTON TO HAND OVER THE PRESIDENCY TO LION ALISON SALES.    THE CEREMONY TOOK PLACE AT OUR REGULAR MONTHLY MEETING IN JULY.   CLUB MEMBERS WERE JOINED BY TWO PROSPECTIVE LIONS, VIVIENNE PUGH AND DR. IAN CHRISTIE FOR THE INDUCTION OF THE NEW LION PRESIDENT.

ALISON, WHO RECENTLY RECEIVED A VOLUNTEERING AWARD FROM THE MAYOR OF FAREHAM ON BEHALF OF FAREHAM COMMUNITY ACTION, IS PUTTING THE FINISHING TOUCHES TO HER TEAM FOR THE COMING TWELVE MONTHS.   THE NEW OFFICEHOLDERS WILL BE ANNOUNCED, TOGETHER WITH LION PRESIDENT ALISONS' PROPOSED PROJECTS FOR 2015 - 2016.   SHE HINTED THAT IT WILL PROBABLY FOCUS ON THE YOUTH IN OUR COMMUNITY.  WATCH THIS SPACE!

IN HIS LAST WEEK AS LION PRESIDENT, REG NORTON VISITED SOUTHERN IRELAND AT THE INVITATION OF LION PRESIDENT SHAY O'CONNOR AND ATTENDED THE CHANGEOVER CEREMONY OF THE DUNGARVAN LIONS CLUB IN CO.WATERFORD WHERE HE PRESENTED A "FRIENDSHIP BANNER" TO THE INCOMING PRESIDENT. 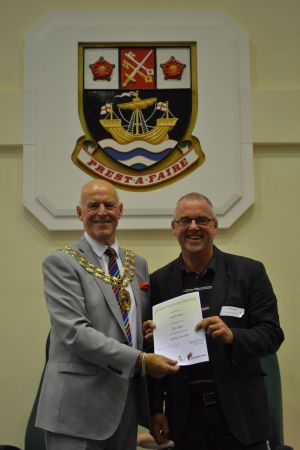 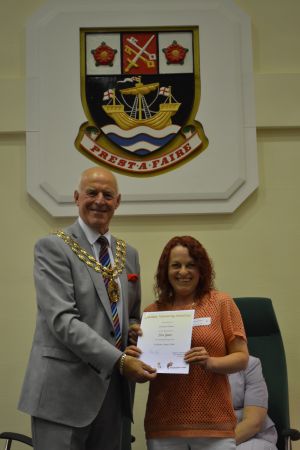 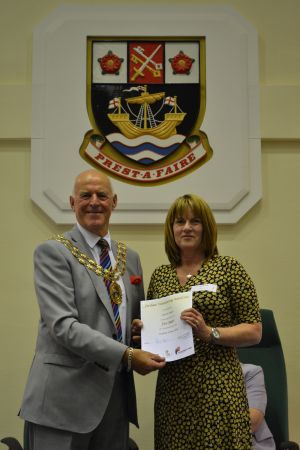 World Sight Day (Thursday 9th October) was wet and miserable so we decided to mark the event at the weekend when the weather improved and more people were about for us to raise awareness of the problems faced by blind and partially sighted people.                                          We were supported this year by an excellent group of young people called "Loud & Proud".

Their slogan seems to be "We may be young, we may be loud, but we're in this together to make you proud of the young generation!".....and they did!

Today, Thursday 2nd October, saw the completion of another small but important little project for Crofton Lions Club.    Two large brick "Planters" which had previously been overgrown with weeds and used as an unofficial litter bin have now been "Beautified"!    Members of Crofton Lions, with the support of the Stubbington Sow & Grow Group and a volunteer from the Co-op planted a large variety of plants and shrubs transforming what were eyesores into a very pleasant addition to the village centre.

This page to be completed shortly

Work started on 19th September to install of our latest  project, an Outdoor Gym in Stubbington Recreation Ground.    The five pieces of exercise equipment are sited near to the Childrens Play Area so parents can use the equipment whilst still keeping an eye on their children at play!

The Official Opening took place on Friday 26th September at 3.30 p.m. but the work that led up to that event is detailed in pictures below

This years Festival of St.George was a great success.  Take a look in greater detail on our page designated to that event.    You will find it at /events/festivalofstgeorge.html

It is with deep sadness that we report the death of Lion Doreen Norton in February 2013.

She will be sorely missed by our Club, by the wider organisation of Lions Clubs and by many in our community.    Pupils at Crofton Anne Dale junior School took part in a special Morning Assembly to celebrate her life and recall many ways in which she was able to help individuals.    Known as "Nanny Norton" to many of the children she worked as a Dinner Lady and also as a volunteer teaching assistant .    The special Assembly ended with 350 children singing a song that reminded them of her,    It was "Spread a little happiness as you go by!"    Crofton Lions were delighted to have encouraged Lion Doreen Norton to join our ranks.   She  brought a great deal of experience to the Club having previously been a member of the Fareham Lions Club.    She originally joined Lions in 1999 and in her time with Fareham Lions she has served as Secretary, Treasurer and two terms as President.    She successfully completed a Lions Leadership Institute Course before becoming Zone Chairman, and followed that by becoming the District Sergeant at Arms.    She had taken part in Lions European Forums in Brussels and Cyprus plus International Conventions in Birmingham and Chicago.   She was one of the team of three guiding lions who helped to form our Club in 2000-2001 and was married to our Charter President Reg.    Doreen worked for Solicitors in London and Portsmouth for 30 years (They let her out for good behaviour!).

To mark Lions ‘World Sight Day' on Saturday 13th October 2012 the Crofton Lions Club invited two representatives from each of two local Pubs to join them in a ‘journey for sight'. Led by a very special Guide Dog, who was later revealed as the Club Presidents husband, Lion Tony Stabler, and accompanied by safety marshals the teams walked blindfold round the busy shopping area in Stubbington and along a ľ mile route to the next pub.

Taking part in an event of this kind is always more fun in a group but behind the ‘fun' image was a serious message.   As the teams progressed members of the Crofton Lions handed out leaflets explaining the need for everyone to have regular routine eye health tests at least every two years.

The Crofton Lions President, Vicky Stabler, congratulated all the participants for bravely accepting the challenge of being blind and she issued certificates of appreciation for Natalie Maddocks, Simon Triggs, Becci Williams and Alana Benson-Green.   She explained that Crofton Lions are also concerned with sight problems in the Third World and said the Club would be pleased to receive donations of unwanted spectacles which would be recycled for use in developing countries.   YOU could really make a difference by offering the gift of sight to someone who is needlessly blind.

FADSAD (The Fareham & District Sports Association for the Disabled) is the chosen Charity for The Crofton Pub, our Lions Club HQ, so it was with great pleasure that Crofton Lions were able to present them with an additional Ł400 from last years 'Presidents Project'. The current Lion President, Vicky Stabler is seen presenting the cheque accompanied by Ian & Jenny Readman, the owners of the Pub.

What a great day we had on Bank Holiday Monday 27th August 2012!

The annual Stubbington Fayre and Donkey Derby was probably the biggest and best we have taken part in.    Many congratulations to everyone concerned.   We are proud to be associated with the organising Committee.

This event has taken place on the August Bank Holiday for more than 40 years. It was originally organised by a group of business people, and later by Fareham Lions Club plus local residents. When, in 2000, the Crofton Lions Club was formed it declined to take over the event but instead suggested a partnership led by Fareham Lions with the active support of Crofton Lions Club and the local Business Community.   It is now a major event in the local community attracting thousands of visitors.   Take a look at the Stubbington Fayre page in the 'Events' section of this site. /events/stubbingtonfayre.html

MAY BARHAM, A FOUNDING MEMBER OF THE CROFTON LIONS CLUB

It is with great sadness that we report the death on Tuesday 24th July 2012 of May Barham.    May had been the leader of one of the local Woodcraft Folk Childrens Groups looking after 6 to 9 year olds.   She remained involved in that activity from 1968 until 1990.   Then at age 80 she became one of the founding members of the Crofton Lions Club.   In 2007 she received an International Humanitarian Award from Mahendra Amarasuriya of Colombo, Sri Lanka, who was the President of The International Association of Lions Clubs during that year.

Soon after that event, when she was no longer able to live independently, she moved into a Nursing Home near her son David in Leeds.    David, his wife Julie, and their three children were then able to see her every day. Stubbington remained her true home, and she will return here to be buried beside her husband, Tom, in the cemetry at St.Edmunds Church (also known asCrofton Old Church.

The Funeral Service took place in St.Edmunds Church on Tuesday 14th August 2012 at 1.30 p.m.  and was extremely well attended.    Sincere thanks to all of you who were able to join us in paying our respects to May.

On Sunday 1st July the Crofton Lions Club held their Changeover Event at 'The Crofton' in HillHead.

Lion Vicky Stabler was installed as the 13th President of the Club and received her badge of office from the retiring President, Lion Reg Norton.

However, before that happened the event began with Lion Reg completing his project which was to give a donation of Ł100 to each of sixteen different 'Good Causes' chosen individually by the sixteen members of the Club.    The organizations and individuals involved were as follows:

JUBILEE PARTY IN THE PARK

***Take a look at our 'Events' page to see what a great success it was!

Lion President Reg Norton has been a volunteer in a range of organisations including Lions, the Air Training Corps, Woodcraft Folk and various school governing bodies for 62 years!    Having been a volunteer throughout the Queen's reign he and his wife Doreen were invited by the Lord Lieutenant of Hampshire to a special event including a Service of Thanksgiving at Winchester Cathedral.    He and all the other Hampshire "Diamond Volunteers" were presented to HRH Prince Edward, the Earl of Wessex. 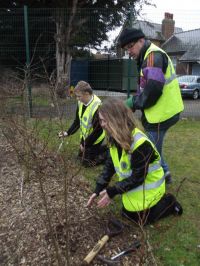 AND A FURTHER SIXTY AT THE EX NAVAL TRAINING ESTABLISHMENT ON SEAFIELD PARK IN HILL HEAD.    WE WERE ABLY ASSISTED BY SEA CADETS FROM T.S.TORMENTOR BASED AT WARSASH.

A 'FEATURE' TREE HAS ALSO BEEN PLANTED IN STUBBINGTON RECREATION GROUND WITH A COMMEMORATIVE BRASS PLAQUE.

At a special cereomony arranged by Fareham Community Action in the Council Chamber at Fareham Civic Centre the Mayor, Cllr Trevor Cartwright MBE presented certicates to four individual members of Crofton Lions.    The Club President also received a certificate commending all members of the Lions Club.               Then, as an extra surprise, the Lion President Reg Norton was presented with a special certificate marking the fact that he had been a volunteer throughout the sixty years of the Queen's reign!

A welcome addition to the medical equipment at the Stubbington Surgery.   Called an ambulatory Blood Pressure Monitor this piece of kit, costing more than Ł1300.00, allows the patient to go about their normal daily life whilst providing vital data to help the doctors decide on the nature of the treatment that should be given.    This equipment has effectively double the capacity of the surgery.

Last Sunday, 12th MAY we had a great day out with a group from the Haven Childrens Centre to the 21st Annual Paultons Park Lions Picnic.     We were so lucky with the weather!    Sunshine all the way!

Altogether there were over 3000 Lions and Friends taking part.

APRIL    The Festival of St.George on SATURDAY 21st APRIL was bigger and better than ever.    The entertainment included old favourites like Geoffrey Gould the Punch & Judy Man, Jonathan the Jesters Team of Clowns, Stilt Walkers and Jugglers (Five of them!) and the Weorod Re-enactment Group shining a light on the Dark Ages in English History!    We  also introduced some excellent new entertainers including the Hampshire Garland Ladies Morris Dancers, Cascade South Downs Harmony Chorus, Orange Apples Storytellers, and Trigger the Train.    Then, on SUNDAY 22nd there was a procession of Minis, Motorbikes and Scooters flying the flag on their traditional "Ride-Out" from The Red Lion in Stubbington.

Take a look at our special "St.George's" Page under the 'Events' Tab.